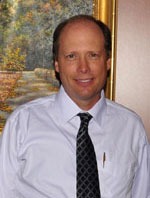 Dr. Richard Palmer is a native of Alberta who has been practicing dentistry in Calgary for the past 20 years. He received both B.Sc. and D.D.S. degrees from the University of Alberta and also received a degree in medicine from the University of Calgary. As a general dentist, he focuses his treatment to primarily endodontic (root canal) treatments.

While putting himself through school, Dr. Palmer worked as a garbage man and as a ‘jug hound’ for a seismic company that worked in the high arctic.

He has a passion for cooking and finding new recipes which he shares with his lovely and devoted wife and the greatest of his accomplishments – his five wonderful children.

He also received the typing award in grade 10 and was a founding member of the Losers Club in grade 11, which at one time boasted twelve members.

Richard is pleased to have joined the Team at Cochrane Dental Centre and looks forward to working with their patients to make better smiles and to help achieve their dental health goals!

Our Practice Always Welcomes New Patients – No Referral is required!

Request An Appointment
Call Us